If you were one of those people who used to write and ask why bands on Sarah didn’t do more gigs, here’s a reminder from the (Scottish) Sun of what happened when The Orchids were due to drive 400-odd miles to London to promote Striving For The Lazy Perfection at the Garage in Highbury in the vague hope that someone from NME or Melody Maker might turn up and be drily dismissive. (The handwritten comment is by the band, by the way!)

But, on a more positive note, here’s the (Glasgow) Evening Times bringing news of what happened two weeks later, and also explaining why Striving For The Lazing Perfection is called what it is. Though I’m not entirely sure they’re right.

Footnote: we obviously didn’t find out about the Orchids’ crash till just before soundcheck, which didn’t give a lot of time to sort out adding anyone else to the bill. But then Harvey suggested he and Bobby did some Field Mice songs, given they were there anyway (Blueboy and Northern Picture Library had been due to support). So they did, including, as Clare says in the There And Back Again Lane booklet, three songs they never played live when the Field Mice were still going: Willow, An Earlier Autumn and A Wrong Turn and Raindrops, the last of those with Harvey on harmonica, which he never played on the record.

An advert from a September 1991 edition of NME to give a bit of context… we did quite a few things at the Underworld (underneath the World’s End pub, opposite Camden Town station), but I have no recollection at all of this Field Mice/Sweetest Ache gig… or who most of those other people were. Gumball? Float? Last Bandits? 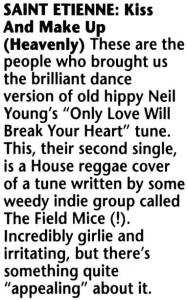 And here’s the NME reviewing Saint Etienne’s cover of the Field Mice’s Let’s Kiss And Make Up. Some of you might be shocked to see the phrase “Incredibly girlie and irritating” appearing in a supposedly right-on, left-wing, politically correct music paper, but you have to bear in mind that it was absolutely fine to say things like that in 1990. No, really, it was – absolutely fine. That’s why so many people writing for the NME in 1990 still work in the media. Is it just me, by the way, or is the tone of this review vaguely patronising? 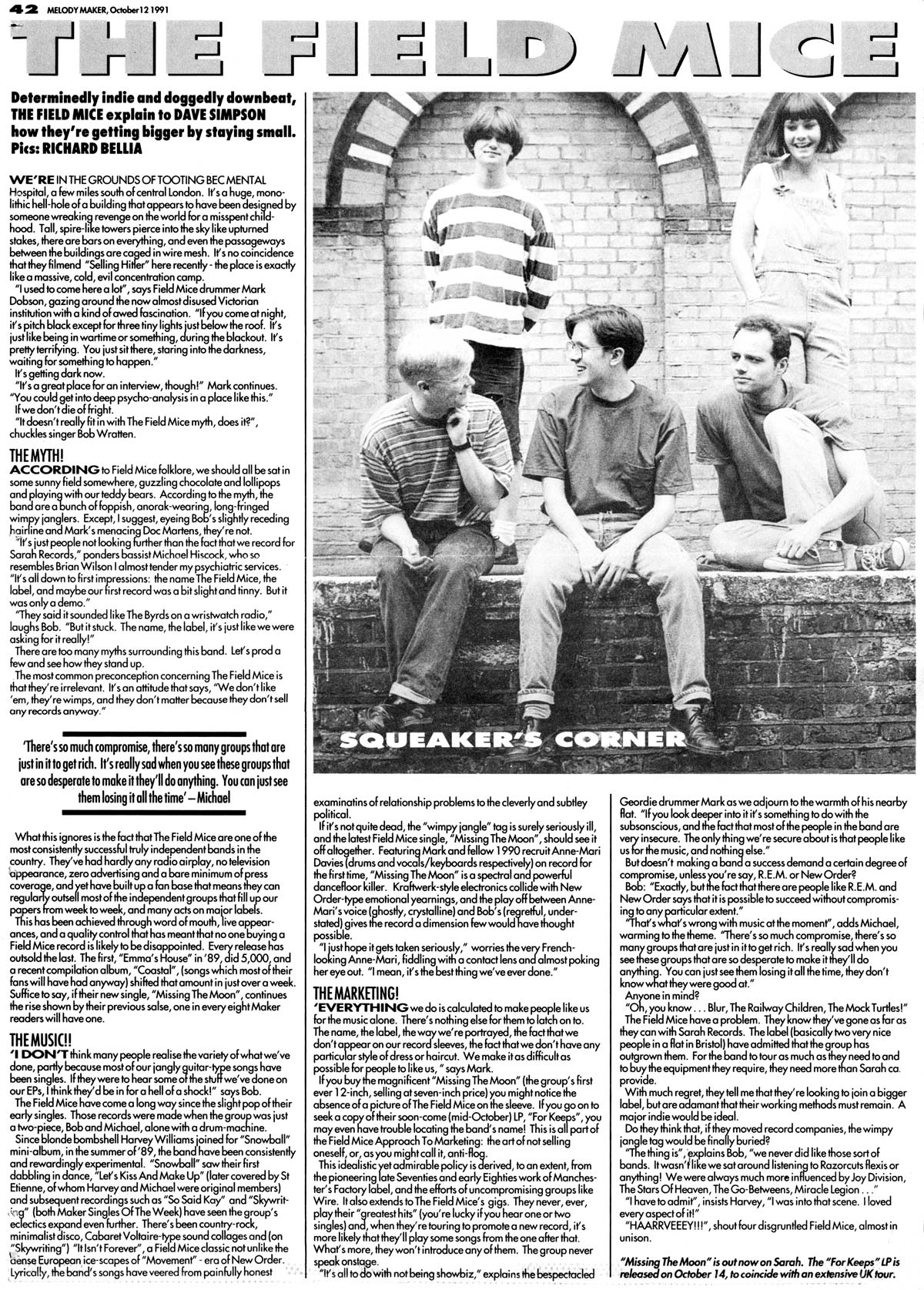 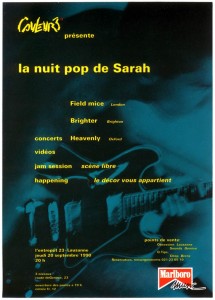 A night in Lausanne, Switzerland, where I’m not sure we’d ever sold a single record. We also didn’t know, till we saw the freebies on the door, that it was sponsored by Marlboro. “Le décor vous appartient” translates roughly as “the decor is owned by you” – I’ve no idea what that means, but I’m sure Alison from Brighter would love to know who owned the bit of decor that split her head open during soundcheck. She still played, after a trip to Lausanne A&E, but in a bit of a painkiller haze, so probably didn’t notice the mass pogo that broke out when Brighter started, and stopped seconds later when everyone realised they weren’t the Damned. All very peculiar. But probably what you’d expect from something that used the words “happening” and “jam session” on a flyer.

Half of a quarter page strip ad from NME and Melody Maker, September 1991 – the other half was an ad for Glass Arcade. I think what we can all conclude from this is that artwork based on a purple and yellow sleeve doesn’t tend to reproduce that well in black and white newsprint. It cost us a couple of grand to learn that; you can have it for free.

I know nothing about Mr Bojangles in Nottingham, though I’m guessing from this flyer that it was on Lower Parliament Street. As you may detect, this is actually a double-sided flyer – indiepop was nothing if not thrifty – and the other side is for a Bob gig at the Dial in Derby. I know nothing about that either, though I have been to the Dial, with The Field Mice. They made us curry. (The Dial did, not The Field Mice – that would be weird.) 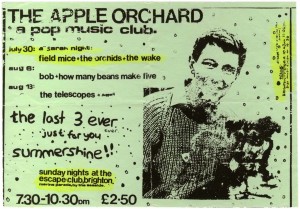 The Apple Orchard was a Sunday night club at the Escape in Brighton – note 10.30pm finish – and this seems to be a flyer for their final three gigs. In case you’re wondering, no, this isn’t an expensively printed two-colour flyer – the green is the paper, the yellow is highlighter pen.

I think we were quite excited to be offered the chance of doing our first Christmas party at a big London venue, the Powerhaus in Islington; the idea that big London venues might be on the lookout for gullible provincial labels who hadn’t quite grasped that a Sunday evening less than 48 hours before Christmas Day isn’t necessarily a good time to hold a party – especially if people have to get the Northern Line to Angel for it – never occurred to us. That would be the old Angel station, of course, with the really narrow island platform. The Powerhaus is now a branch of Halifax. Angel now has the longest escalators on the Underground. Don’t say we never tell you anything. 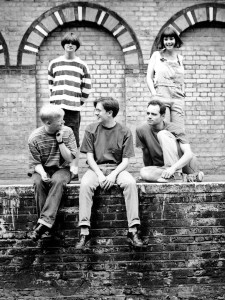 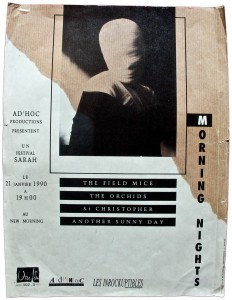 An advert for a concert at the New Morning in Paris – our first Sarah Night in France. It’s actually the back page of Les Cahiers du Cinema, not because that was our target audience, but because the promoter had always wanted to take out an ad in Les Cahiers du Cinema – he wasn’t really an indie kid (though I do have a lovely memory of him playing air guitar to Caveman during The Orchids’ soundcheck). It obviously worked, as 700 people turned up (or maybe that was the pieces in Libération and Les Inrockuptibles…) to witness Chris from The Orchids surprising everyone, possibly including himself, by playing drums on Sensitive. 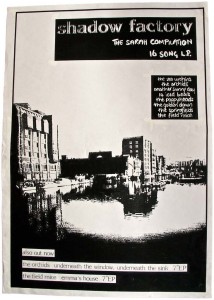 A poster advertising our first compilation and also new singles by The Orchids and The Field Mice (SARAHs 11 and 12), which had just come out. It would obviously have looked less inept if the text in the top right had been black on white rather than white on black, but it’s based on the sleeve artwork, and we had no realistic (i.e. affordable) way of producing a negative. The view down Welsh Back from Bristol Bridge (which is what this is) has changed a bit since 1988… these days, it’s in colour… 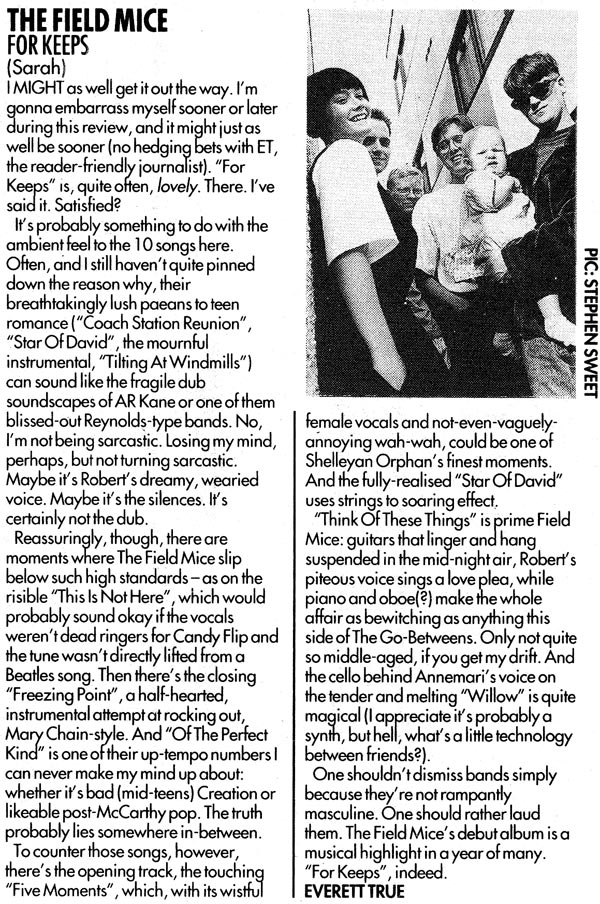 Bit of a legendary gig, this, partly because of our own mad decision to try to have a 4-band line-up on a Sunday night when licensing laws meant that everything had to be done by 10.30pm. It was only Brighter’s second-ever gig, the Field Mice played as a duo of Bobby and Harvey as Michael couldn’t make it, and Action Painting! (who were in the audience) got into a fight with the Sea Urchins who carried on playing even after the lights had gone up… pretty good entertainment for £2.50, I think you’ll agree. Happy days.

Click here for the review in local listings magazine Venue. 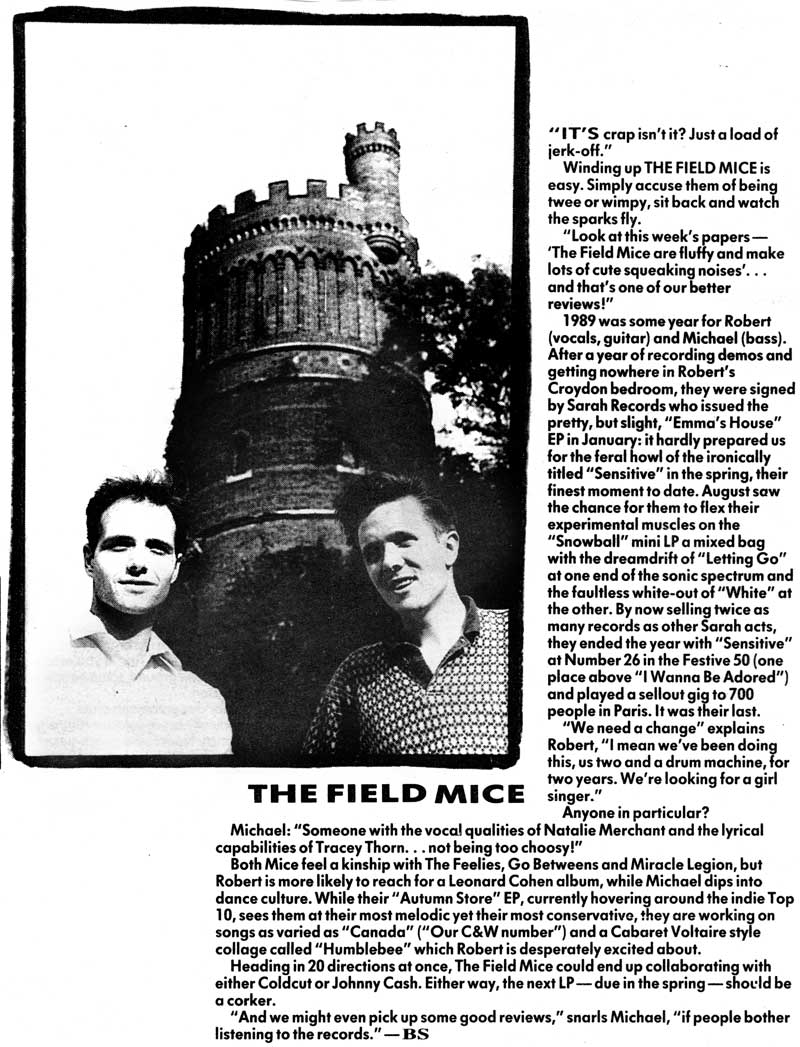 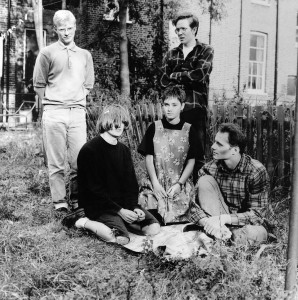 A quarter page ad in NME and Melody Maker from October 1991. The railway platforms are at Clifton Down, our local station in Bristol. The last date on that list of gigs – 21st November at the Dome (Boston Arms) in Tufnell Park – turned out, of course, to be the Field Mice’s last ever performance.