Before Sarah, Clare used to write Kvatch fanzine and Matt used to write Are You Scared To Get Happy?, which was part of the Sha-la-la flexidisc label collective (hello Pete, Jim, David); he was also one of a group of people (hello Adrian, Gordon, John, Jon, Robena, Jeremy, Bob, Michael, Marion) promoting Wednesday-night gigs at Bristol’s George & Railway pub as the E.E.C. Punk Rock Mountain. You can find out more about these things here:

Are You Scared To Get Happy?

And below are some random press cuttings, flyers, artefacts and so forth relating to this period… 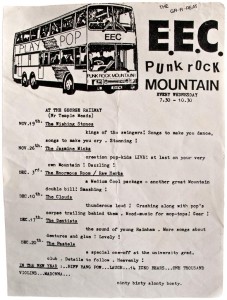 A flyer from November 1986, advertising upcoming events at the EEC Punk Rock Mountain; which, I discovered on a trip back to Bristol the other week, is now flats, rather than the slightly peculiar country and western pub in the middle of a traffic island that I remember so fondly. And, frankly, so badly – my only real recollections of the gigs listed here are that The Clouds were ace and that The Jasmine Minks were completely spooked by the mirrors that lined the rear wall – given the size of the bar, they were effectively staring at themselves for the entire duration of their set. Younger readers might also like to know that only four of the bands on this flyer were any good; I’m afraid you’ll have to decide which for yourselves.

The six issues of Clare’s old fanzine, Kvatch, starting with #1 in the top left, which came out in 1984 when she was 16, and moving round clockwise to #6 (bright red title lettering), which is the one that had the Sea Urchins/Groove Farm flexi. 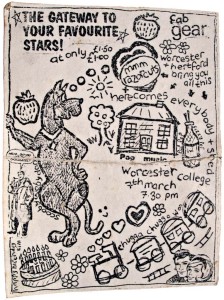 In my head, this has always been a ticket, not a flyer, but in retrospect I’m not sure it’s the sort of gig that would have had tickets and, looking at it again, it feels more like a flyer… but, that said, I’m not quite sure why I’d have had a flyer, given we’d only arrived in Oxford that evening (on a Subway-organised minibus from Bristol – I think Martin Subway was checking out Razorcuts). Oh, I don’t know: it was a long time ago and it’s all a bit hazy but, basically, 7th March 1986 was the first time I saw Talulah Gosh, and the first time anyone saw them, as it was their debut gig. They were also possibly last-minute additions, given they’re not actually mentioned anywhere. In fact, I could be making the whole thing up. But I’m not.

Dipping our spoon back into the primordial indie soup, these stickers were given out on the door when Talulah Gosh played the EEC Punk Rock Mountain, a pre-Sarah club night at the George & Railway in Bristol. I was never entirely sure where to stick them – despite many suggestions over the years – which is why I still have them. I should probably credit Robena with the design, by the way – she was the artist in the EEC PRM’s utopian indie-pop collective. NB for those not around in 1986, Marigold is what Amelia was then calling herself, Pebbles is what Liz was calling herself, and the EEC was an attempt to bring about pan-European economic cooperation and integration and establish a common market which is, of course, a Very Good Thing.

A poster for the last issue of Clare’s pre-Sarah fanzine Kvatch, which came with a flexidisc featuring Cling Film by The Sea Urchins and Baby Blue Marine by Bristol’s Groove Farm (see here for a picture of the flexi in its handpainted sleeve). The Sea Urchins are the band in the bottom half of the poster. Of the other bands mentioned on the poster, Mighty Mighty’s Throwaway was on the first Sha-la-la flexidisc, and Friends of the Family morphed into Pram. 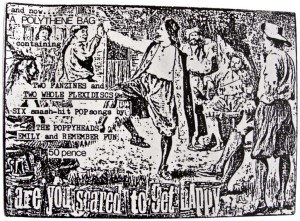 A flyer for issue 6 of Are You Scared To Get Happy and its two Sha-la-la flexis, one of them the Poppyheads’ 4-song Postcard for Flossy EP – yes, a 4-song 6½” flexi. The Poppyheads later recorded for Sarah, obviously, while Remember Fun had two tracks released by Egg and a retrospective EP on Matinee. Emily’s 4-song Irony 12″, meanwhile, was not only the 50th single on Creation but also much heavier than our flexidisc, as many journalists pointed out at the time. 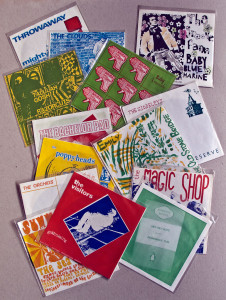 These were the flexidiscs we released with our fanzines prior to setting up Sarah; the Sea Urchins appeared on two flexis, one with Kvatch (Cling Film), one with Sha-la-la (Summershine). The Orchids, Talulah Gosh and Poppyheads also had Sha-la-la releases (From This Day, I Told You So and the Postcard for Flossy EP respectively). It was important that all the flexis came in proper sleeves; they were throwaway, but weren’t meant to be thrown away. (In case you’re wondering, Sha-la-la was a flexdisc label, with the discs distributed via various fanzines, chiefly Are You Scared To Get Happy?, Simply Thrilled, Baby Honey and Trout Fishing in Leytonstone.) 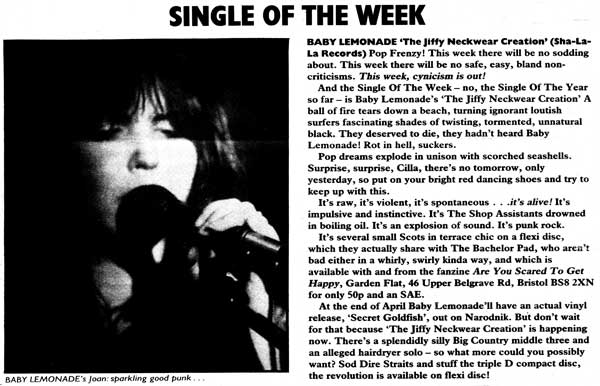 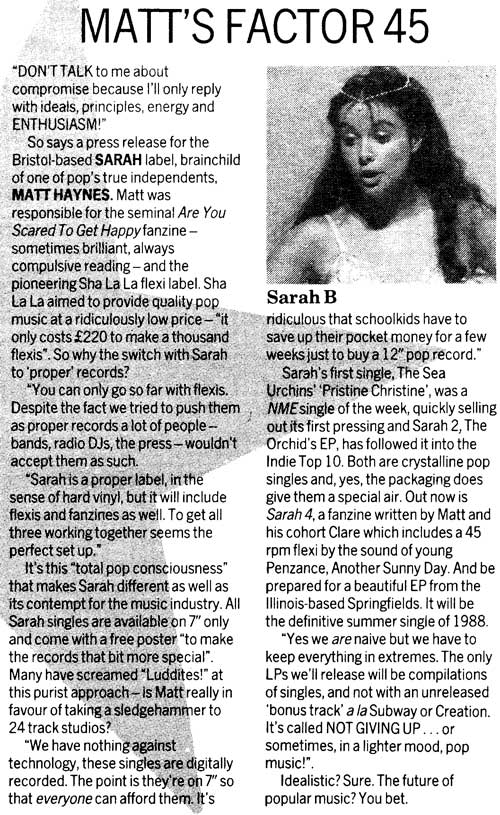